Advertise on this site?

Human to human transmission of coronaviruses is primarily thought to occur among close contacts via respiratory droplets generated by sneezing and coughing. 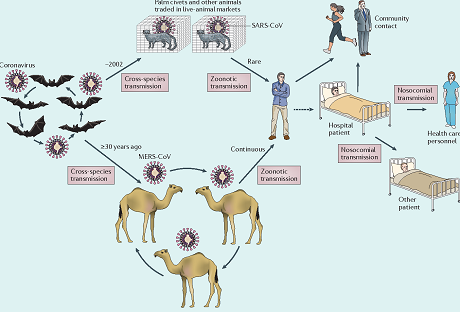 Figure 1. The emergence of severe acute respiratory syndrome coronavirus (SARS-CoV) and Middle East respiratory syndrome coronavirus (MERS-CoV). Bats harbour a wide range of coronaviruses, SARS-CoV-like and MERS-CoV-like viruses. SARS-CoV could cross the species barrier into masked palm civets and other animal in live-animal markets. Several people in close proximity to palm civets can be infected with SARS-CoV. In the past, more than 30 years ago, a MERS-CoV ancestral virus crossed the species barrier into dromedary camels. Abundant circulation of MERS-CoV in dromedary camels results in frequent zoonotic transmission of this virus. SARS-CoV and MERS-CoV spread between humans mainly through nosocomial transmission, which results in the infection of health care workers and patients at a higher frequency than infection of their relatives. Published in Nature Reviews Microbiology 2016. DOI:10.1038/nrmicro.2016.81.

SARS-CoV-2
The primary mode of transmission of SARS-CoV-2 is from person-to-person via respiratory droplets when people cough or sneeze. These droplets can land in the mouths or noses of people who are nearby or possibly be inhaled into the lungs. These respiratory droplets only stay in the air for a short time but may stay viable and contagious on a metal, glass or plastic surface. The assumption is that respiratory droplets with SARS-CoV-2 are similar to other coronaviruses, which survive for up to nine days at room temperature. However, a recent study by CDC suggests that the virus is stable for several hours to days in aerosols and on surfaces, much longer than assumed.

Disinfection of surfaces is possible with substances such as 70% ethanol applied for one minute.There have been estimates for the basic reproduction number ranging from 2.13 to 4.82, which is the average number of people an infected person is likely to infect. As of 24 January 2020, the virus was reported to have been able to transmit down a chain of up to four people. This is similar to severe acute respiratory syndrome-related coronavirus (SARS-CoV). The WHO does not rule out the possibility of transmission through food and that meat and animal products should be cooked thoroughly as a rule of thumb.

Non-human to human transmission: The route of transmission from animals to humans is not fully understood, but dromedary camels are the major reservoir host for MERS-CoV and an animal source of infection in humans. Strains of MERS-CoV that are identical to human strains have been isolated from dromedaries in several countries, including Egypt, Oman, Qatar, and Saudi Arabia.
Human-to-human transmission: The virus does not pass easily from person to person unless there is close contact, such as providing unprotected care to an infected patient. There have been clusters of cases in healthcare facilities, where human-to-human transmission appears to have occurred, especially when infection prevention and control practices are inadequate or inappropriate. While the majority of MERS cases have occurred in health care settings, thus far, no sustained human to human transmission has been documented anywhere in the world. It is not always possible to identify patients with MERS‐CoV early or without testing because symptoms and other clinical features may be non‐specific.

Since the outbreak in 2012, cases of MERS have been reported in 27 countries. These include Algeria, Austria, Bahrain, China, Egypt, France, Germany, Greece, Islamic Republic of Iran, Italy, Jordan, Kuwait, Lebanon, Malaysia, the Netherlands, Oman, Philippines, Qatar, Republic of Korea, Kingdom of Saudi Arabia, Thailand, Tunisia, Turkey, United Arab Emirates, United Kingdom, United States, and Yemen. Approximately 80% of human cases have been reported by Saudi Arabia. People get infected through unprotected contact with infected dromedary camels or infected people. Cases identified outside the Middle East are usually traveling people who were infected in the Middle East and then travelled to areas outside the Middle East.

SARS-CoV
The primary route of transmission for SARS-CoV is contact with respiratory droplets or fomites containing the virus. Although diarrhea is often a symptom in people with SARS, the fecal-oral route does not appear to be a common mode of transmission. Droplet spread can happen when droplets from the cough or sneeze of an infected person are spread through the air and deposited on the mucous membranes of the mouth, nose, or eyes of persons who are nearby. The virus also can spread when a person touches a surface or object contaminated with infectious droplets and then touches his or her mouth, nose, or eyes.