Coronaviruses were first discovered in the 1960s. The earliest ones discovered were infectious bronchitis virus in chickens and two viruses from the nasal cavities of human patients with the common cold. These two viruses were subsequently named human coronavirus 229E and human coronavirus OC43. Other members of this family have since been identified, including SARS-CoV in 2003, HCoV NL63 in 2004, HKU1 in 2005, MERS-CoV in 2012, and SARS-CoV-2. Most of these have involved serious respiratory tract infections. The name "coronavirus" is derived from the Latin corona and the Greek κορώνη (korṓnē, "garland, wreath"), meaning crown or halo. The name refers to the characteristic appearance of virions (the infective form of the virus) by electron microscopy, which have a fringe of large, bulbous surface projections creating an image reminiscent of a crown or of a solar corona. This morphology is created by the viral spike proteins on the surface of the virus that determine host tropism.

The most recent common ancestor of human coronavirus OC43 has been dated to the 1950s. MERS-CoV, although related to several bat coronavirus species, appears to have diverged from these several centuries ago. The human coronavirus NL63 and a bat coronavirus shared a common ancestor 563–822 years ago. The most closely related bat coronavirus and SARS-CoV diverged in 1986. A path of evolution of the SARS virus and keen relationship with bats have been proposed. The coronaviruses could have been coevolved with bats for a long time and the ancestors of SARS-CoV first infected the species of the genus Hipposideridae, subsequently spread to species of the Rhinolophidae and then to civets, and finally to humans. 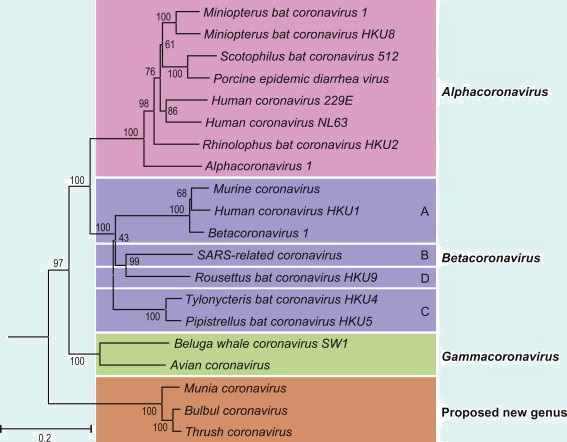 Coronavirus disease 2019 (COVID-19)
In December 2019, a pneumonia outbreak was reported in Wuhan, China. On 31 December 2019, the outbreak was traced to a novel strain of coronavirus, which was given the interim name 2019-nCoV by the WHO, later renamed SARS-CoV-2 by the International Committee on Taxonomy of Viruses. As of 17 June 2020, there have been at least 443,000 confirmed deaths and more than 8,142,000 confirmed cases in the coronavirus pneumonia outbreak. The Wuhan strain has been identified as a new strain of Betacoronavirus from group 2B with an ~70% genetic similarity to the SARS-CoV. The virus has a 96% similarity to a bat coronavirus, so it is widely suspected to originate from bats as well.

There have been speculations that the virus escaped from a lab in Wuhan studying bat coronaviruses and then spread to the public. This theory has also evolved into claims that the virus was genetically engineered to be a bioweapon. However, scientists say that there is no evidence that it was created in a lab.

Middle East respiratory syndrome (MERS)
A new type of coronavirus was identified in 2012, initially called Novel Coronavirus 2012, and now officially named Middle East respiratory syndrome coronavirus (MERS-CoV). The WHO issued a global alert soon after. On 12 May 2013, a case of human-to-human transmission in France was confirmed. In addition, cases of human-to-human transmission were reported in Tunisia. Two confirmed cases involved people who seemed to have caught the disease from their late father, who became ill after a visit to Qatar and Saudi Arabia. Despite this, it appears that the virus had trouble spreading from human to human, as most individuals who are infected do not transmit the virus. By 30 October 2013, there were 124 cases and 52 deaths in Saudi Arabia.

After the Erasmus Medical Centre in The Netherlands sequenced the virus, the virus was given a new name, Human Coronavirus–Erasmus Medical Centre (HCoV-EMC). The final name for the virus is Middle East respiratory syndrome coronavirus (MERS-CoV). In May 2014, the only two United States cases of MERS-CoV infection were recorded, both occurring in healthcare workers who worked in Saudi Arabia and then traveled to the U.S. One was treated in Indiana and one in Florida. Both of these individuals were hospitalized temporarily and then discharged. In May 2015, an outbreak of MERS-CoV occurred in the Republic of Korea, when a man who had traveled to the Middle East, visited 4 hospitals in the Seoul area to treat his illness. This caused one of the largest outbreaks of MERS-CoV outside the Middle East. As of December 2019, 2,468 cases of MERS-CoV infection had been confirmed by laboratory tests, 851 of which were fatal, a mortality rate of approximately 34.5%.

Severe acute respiratory syndrome (SARS)
SARS-CoV first appeared in November 2002 in the Guangdong province of southern China. Following the outbreak of severe acute respiratory syndrome (SARS) which had begun the prior year in Asia, the WHO stating that a novel coronavirus identified by a number of laboratories was the causative agent for SARS. The virus was officially named the SARS coronavirus (SARS-CoV). Over 8,000 people were infected, about 10% of whom died. SARS-CoV is thought to be an animal virus from an animal reservoir, probably bats, that spread to other animals like civet cats. The virus is zoonotic as it has the potential to jump from infected animals to humans as could have occurred in Guangdong.