Outbreaks of coronavirus types of relatively high mortality are shown below.

Coronavirus disease 2019 (COVID-19)
The 2019–20 coronavirus outbreak is an ongoing global outbreak of coronavirus disease 2019 and a Public Health Emergency of International Concern. It is caused by the SARS-CoV-2 coronavirus, first identified in Wuhan, Hubei, China. As of 17 June 2020, more than 8,142,000 cases have been confirmed. Almost all countries in the world have been affected, with major outbreaks in Central China, South Korea, Italy, Iran and the US. More than 443,000 people have died, with over 4,600 in mainland China and over 34,000 in Italy. In the US more than 2,137,000 people are infected with over 116,000 deaths. 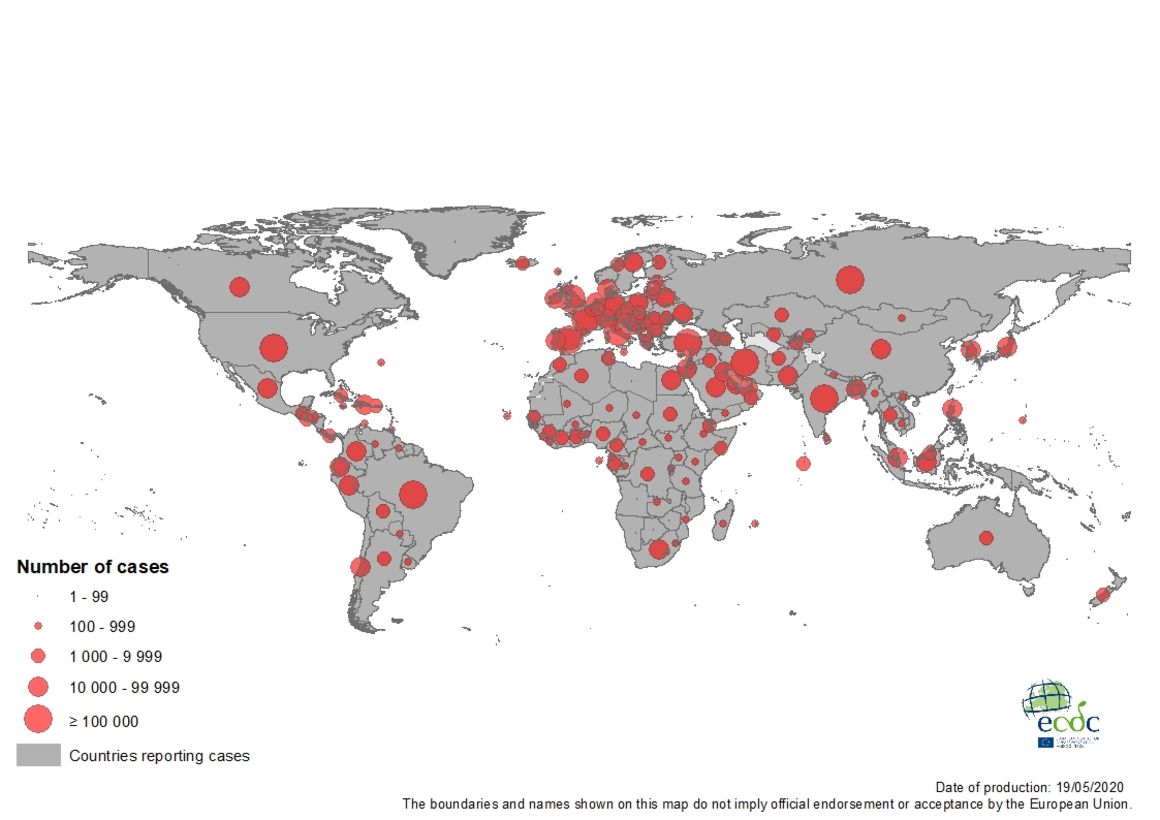 
Middle East respiratory syndrome (MERS)
In September 2012, a new type of coronavirus was identified, initially called Novel Coronavirus 2012, and now officially named Middle East respiratory syndrome coronavirus (MERS-CoV). Two confirmed cases involved people who seemed to have caught the disease from their late father, who became ill after a visit to Qatar and Saudi Arabia. Despite this, it appears that the virus had trouble spreading from human to human, as most individuals who are infected do not transmit the virus. By 30 October 2013, there were 124 cases and 52 deaths in Saudi Arabia. In May 2015, an outbreak of MERS-CoV occurred in the Republic of Korea, when a man who had traveled to the Middle East, visited 4 hospitals in the Seoul area to treat his illness. This caused one of the largest outbreaks of MERS-CoV outside the Middle East. As of December 2019, 2,468 cases of MERS-CoV infection had been confirmed by laboratory tests, 851 of which were fatal, a mortality rate of approximately 34.5%.

Severe acute respiratory syndrome (SARS)
The outbreak of severe acute respiratory syndrome (SARS) was first reported in Asia in February 2003. The virus spread to more than two dozen countries in North America, South America, Europe, and Asia before the SARS global outbreak of 2003 was contained. The WHO stating that a novel coronavirus identified by a number of laboratories was the causative agent for SARS. The virus was officially named the SARS coronavirus (SARS-CoV). Over 8,000 people were infected, about 10% of whom died. Since 2004, there have not been any known cases of SARS reported anywhere in the world. A few cases have been reported as a result of laboratory accidents or, possibly, through animal-to-human transmission (Guangdong, China).

Advertise on this site?

You can also make a donation by PayPal and support the Corona Virus Net website.